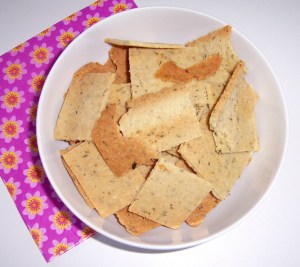 The credit for this recipe goes to Julie and Charles Mayfield and their Quick and Easy Paleo Comfort Foods cookbook.

I love this recipe as the crackers are loved by paleo and non-paleo people alike.  The crackers are great as a snack with houmous and quick and simple for canapes if you are having people over.  Your guests will have no idea they are “special” crackers.  The original recipe states that they will keep well in an air-tight box for a day or two but no matter how many of these we make they are almost always finished right away so I can’t personally vouch for that.

Adding herbs is optional in this recipe.  Personally,  I like to add rosemary because I love it’s flavour and health giving properties. Studies have shown that rosemary has anti-inflammatory properties (it blocks the COX-2 pathway) and scientists are now looking at rosemary’s polyphenols and their possible effect on prostrate cancer.

Vegetarians should be aware that a small study has demonstrated that both rosemary and green tea can inhibit non-heme (non-animal) iron absorption.