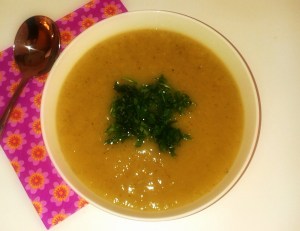 For those of you who have given up potatoes and miss their culinary “thickening” abilities in soups this recipe is for you.

A paleo, SCD, gluten, dairy and potato free soup which is quick and easy to make yet still tastes thick and creamy like it was made with potatoes. For health reasons many people choose to avoid potatoes which are part of the nightshade (solanaceae) family which also includes other popular foods such as tomatoes, aubergine (eggplant) and peppers.  The nightshades contain alkaloids whose toxins range from very mild to very poisonous.  Animal studies have shown that potato glycoalkaloids adversely affect intestinal permeability and aggravate inflammatory bowel disease (see here and here).  They may not be that great for your liver either (see here).  There is quite a lot of anecdotal talk about cutting out nightshades helping arthritis. Unfortunately this soup doesn’t freeze that well (the leeks go a bit stringy) but it will keep in the fridge for a couple days.   Please note that you only get the thick creamy texture with frozen cauliflower, not fresh. Prep Time/Cook Time About 10 mins prep and 20 mins cooking time Ingredients